Flies in the Pollen 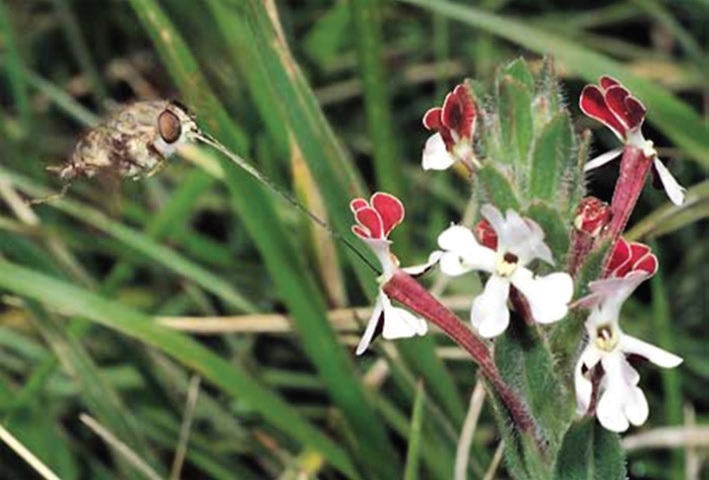 Our look alike cousins, the bee flies (Bombyliidae), have large, stout and hairy bodies allowing them to easily mimic wasps or bees. Many beeflies are out and about early in the season and in cold weather they are key pollinators of many spring wildflowers. Some are highly specialised feeders having coevolved with their plant partners. They employ astoundingly long proboscis permitting them to suck up nectar from flowers with deep floral tubes. Over the millenniums evolution has resulted in gradual proportional lengthening of the floral tubes and the bee fly proboscises. As the lengths of the flower tube and the bee fly’s proboscis converge, it has produced a remarkable degree of specialisation. The plants have come to being nearly fully reliant on these bee flies for pollination, as most other proboscisbearing insects cannot reach the deep nectar pools. iv

Remarkably, as the bee flies’ wings continue their high frequency buzz; their front legs grip the flower allowing their long rigid beaks (?) to suck up the nectar. To avoid predator spiders or ambush bugs (cryptically hiding within the flowers), they do not actually land on the flower, but instead just barely touch the flower allowing small amounts of pollen to stick to their furry coats.

Some of the deep floral tubed flowers include members of the geranium family, Geraniaceae, including storksbills Pelargonium sp., and cranesbills, Geranium sp., as well as the long floral tubed members of boronia and native heath families, such as long bell flowers of Correa sp. and Epacris sp. Additionally the long proboscises are ideal for reaching the nectaries of old garden favourites such as the eye-catching primroses Primulaceae, ubiquitous forget-me-nots, Myosotis sp., honesty Lunaria sp. as well as the native iris wildflowers (Iridaceae) such as white flag iris Diplarrena sp., blue purpleflag Patersonia sp. and pretty grassflag, Libertia sp.

Many of South Africas floral gifts to the world including the highly scented Freesia sp., cape tulip Homeria sp., delightful Ixia sp. and the classic English perennial border plants of the Gladiolus sp. and Iris sp. are also keenly targeted by our long proboscis bee flies.

Scaringly for many insects our bee flies have gruesome larvae which survive by parasitising wasps and bees and other ground dwelling insects. Once their pupae rise to the surface they sit on the ground while they expand their wings to emerge as big adult bee flies. At this time, because they are at high risk of predation by spiders, lizards and birds they employ various forms of camouflage.

One type of camouflage involves matching the colours of the background that they’re sitting on. Often they develop brownish colourations and commonly sit unobtrusively on sandy paths.

Others have slightly different types of camouflage where the outline of their body is broken up with disruptive colourations so that the outlines of their abdomens are very difficult to detect v.

Arguably our most amazing fly cousins are the South African, tangleveined flies (Prosoeca ganglbaueri). Like Pinocchio, they have a bizarre appearance brandishing the longest mouthparts of any known fly. They protrude prodigiously as much as five centimetres from their head, this being some five times the length of its bee-size body. In flight these ungainly appendages dangle between the flies legs and trails far behind their bodies.

To an airborne fly, a stretched out proboscis might seem a stark handicap (imagine wandering around with a ten metre straw dangling from your mouth). This handicap is well worth its aerodynamic impact.

The bizarre proboscis gives the meganosed fly access to nectar pools in long, deep flowers that are simply out of reach mostly to all other insects. This ensures that the flowers pollinated by long-nosed flies benefit from a near-exclusive pollen carrier service. It also guarantees that pollen is carried to the right addresses. Fortunately as long-nosed flies cannot survive on the nectar they get from servicing just one plant species, they visit a few other deep flowers to gather the energy they need. (Johnson & Steiner)vi 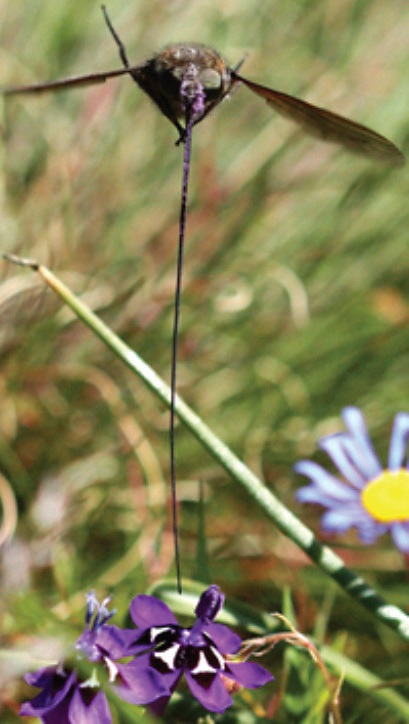 Long tongued flies benefit from their own suction pump

Although it could be expected that our long tongued flies would be very slow to suck up the sticky nectar through their narrow strawlike tongues, surprisingly this is not the case. In fact they easily out compete flies with just normal sized nectar-sipping mouth parts. Actually they can suck up most of the available nectar in just one go, due to their own highly effective suction pumps.

For example, the extremely long, thin proboscis of the South African Prosoeca (Nemestrinidae) flies, use their suction pumps to produce a pressure gradient along their proboscis, which enables sucking up of nectar. They can even slurp up the most viscous sugar-rich liquids using their highly efficient two-part suction pumps.

These pumps are powered by strong head muscles which have evolved to increase in size in proportion to their proboscis length. These flies are able to sip up more nectar in a single visit than other flies thereby gaining advantage over other flies with average length tubes.

Our biting March and Stable Fly’s cousins give us a bad name!

Mostly in the summer months, our biting fly cousins are renowned for their painful bites and annoying habits. Within Australia, the biting flies of greatest significance are our horse flies or March flies (Family Tabanidae) and our stable flies (Muscidae), as well as our biting midges or sand flies (Ceratopogonidae) and the ubiquitous mosquitoes (Culicidae).

There are about 400 species of March fly (Tabanids) in Australia, and the name ‘March’ is not really to do with the seasons in the southern hemisphere, as they occur throughout the summer months. Rather it is more to do with their annoying arrival in northern hemisphere countries in early spring time (around March).

While the male March fly simply feeds on flower nectar and pollen, the majority of females prefer to pierce our skin at meal time but fortunately they do not transmit disease to humans. They use the proteins in their blood meals to basically develop eggs and give rise to the next generation. That’s why they’re so insistent on getting at your blood.

After mating, the females disperse, travelling many kilometres in search of blood meals. March flies have a short life span but they have a long lifecycle. They lay their eggs in sheltered areas such as moist sand or twigs. Within a week the eggs hatch into larvae which feed on rotting vegetation or aquatic materials. The larval stages last for at least three months, during which time they go through between six and nine instars stages. Adult March flies usually emerge after rain and live for about one month and characteristically display two large prominent eyes.

Females are armed with two large blade-like mouthparts, which are used to pierce and slash skin. They inflict an annoyingly itchy and painful wound which will continue to ooze blood long after the mouthparts are extracted as a result of the anticoagulants in their saliva. Some animals can lose up to 300ml of blood per day due to attacks by these flies, resulting in serious blood loss. Surprisingly it’s not only the soft or furry animals that March flies pursue as they often feed on crocodiles in North Queensland.

In some places they’re known as horse flies worrying horses to such a degree that horse riders may lose control of their steeds. March flies mostly get preyed upon by all the usual flying insect eaters, like birds and spiders, but a swift human hand can also strike the big, black flies.

Interestingly March flies have important cultural significance for the Wardaman Aboriginal Nation from north west of Western Australia. When the adult March Fly appears at the around the end of September it heralds the arrival of their wet season vii.

The stable fly, Stomoxys calcitrans is a vicious biter with piercing and sucking mouthparts that can easily penetrate socks and stockings. Stable flies are much smaller and less robust than March flies but have longer lives. Both sexes of the stable fly search for blood meals, often twice a day and can engorge on blood up to three times their own body weight.

Fortunately these flies are seldom found in urban situations (except where horse stables or major composting areas are nearby) and are more often associated with rural properties and domestic animals; they are also common on some beaches where they breed in seaweed.

Not only are we key pollinators of a rich diversity of species in our wildflower understories but we are now becoming more and more valued for our pollination services in a range of horticultural crops and ornamental landscapes and gardens.

Critically, pollination of tree orchards such as mangos and avocados have traditionally relied on the service of usual pollinating agents such as bees, beetles, wasps, moths and butterflies.viii

Unfortunately orchardists are noticing a steady decline in production levels as a consequence of reduced honey bees and beetles populations. To overcome this problem they are working towards attracting the pollination services of a rich diversity of flies ix.

In the case of avocado orchards, their usual flowering physiology makes them tricky to pollinate when relying completely on bees because the flowers not only open as male one day and female the next, but are also only open just a few hours a day and frequently during cold nights. Fortunately we are ideally suited as alternative pollinators because we are active at night and we can work in the cold and rain.

If gardeners, bush carers and orchardists understand our life cycles they can ensure we will help sustain wildflower understories and floral landscapes as well as boost orchardist’s yields. Primarily we require the right breeding habitat and insect prey located either within the landscape or in close proximity to orchards so that our larval stage can flourish. Our larva love munching aphids and other pests found in grassy understories or on orchard trees thus delivering a double benefit of pollination and pest control x.

Part 1 of this article focused on hoverflies and appeared in the NPQ Journal for December 2019.

Part 2 of this article is reproduced, with the author’s permission, from an article published in ‘Eucryphia’, the Journal of the Australian Plants Society Tasmania Inc. in September 2018.