Fire on Mount Lindesay: the aftermath 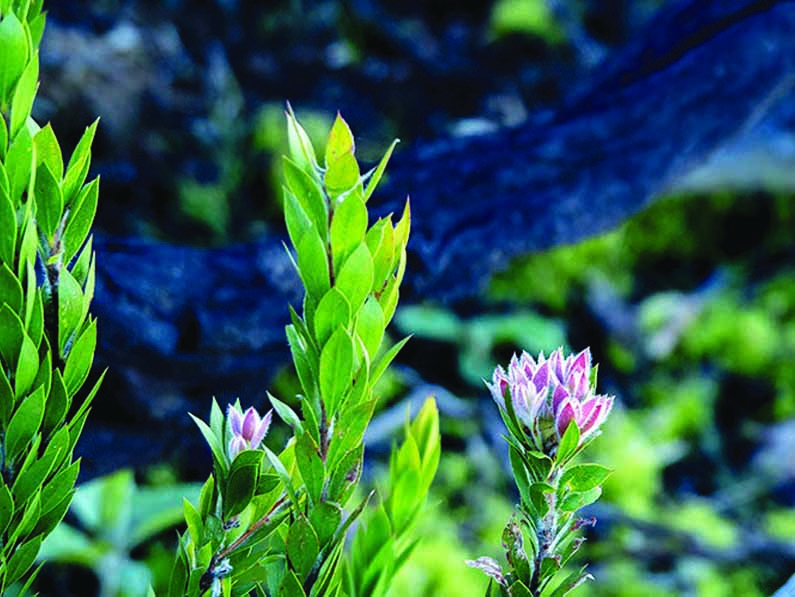 We all watched in horror last November as wildfires devastated eastern Australia. Quite apart from the human cost, the fires wiped out 3.8 million hectares of mostly temperate forest and an estimated billion native animals. Fire sensitive and rarely-burned Gondwanan rainforests were significantly impacted – some for the first time in living memory. Mount Lindesay, on the Queensland-New South Wales border, was directly in the path of one wildfire that came from the south, eventually reaching the summit. The mountain has been one of Queensland’s most documented locations, both in terms of history and appearance – its spectacular two-layered encircling cliffs protecting two forest clad verandas – until November 2019.

Seedlings of Melaleuca, Leptospermum, Callitris, Banksia and others

I am one of a small group of people who have climbed Mount Lindesay regularly over the past two decades and at the height of the blaze, we were devastated to see images of the mountain on fire. It has become a special place for us because of the nature and variation of the vegetation, along with the appeal of the climb. As soon as it was deemed safe, we planned to visit the mountain to gauge the extent of the damage. However, a national parks’ closure order immediately after the fire, extended by torrential rainfall early this year, and then Covid-19 travel restrictions, meant that we were unable to travel there until late June.

Two friends attempted the ‘Tourist Route’ on the south eastern corner but reached an impasse after 30 metres – a massive Banksia tree that had once bridged a vertical gully was gone, destroyed by the fire and a subsequent landslide. With insufficient climbing safety equipment, they wisely retreated.

We began a forensic examination of the fire damage to assess whether or not an ascent was possible and safe. On 1 July, we used a drone to photograph the lower cliff line. Of particular concern were large, steeply-sloping areas of bare, black dirt and ash extending right to the edge of the cliffs on the first veranda. The route up to it appeared to be climbable but unstable, loose and dangerous. 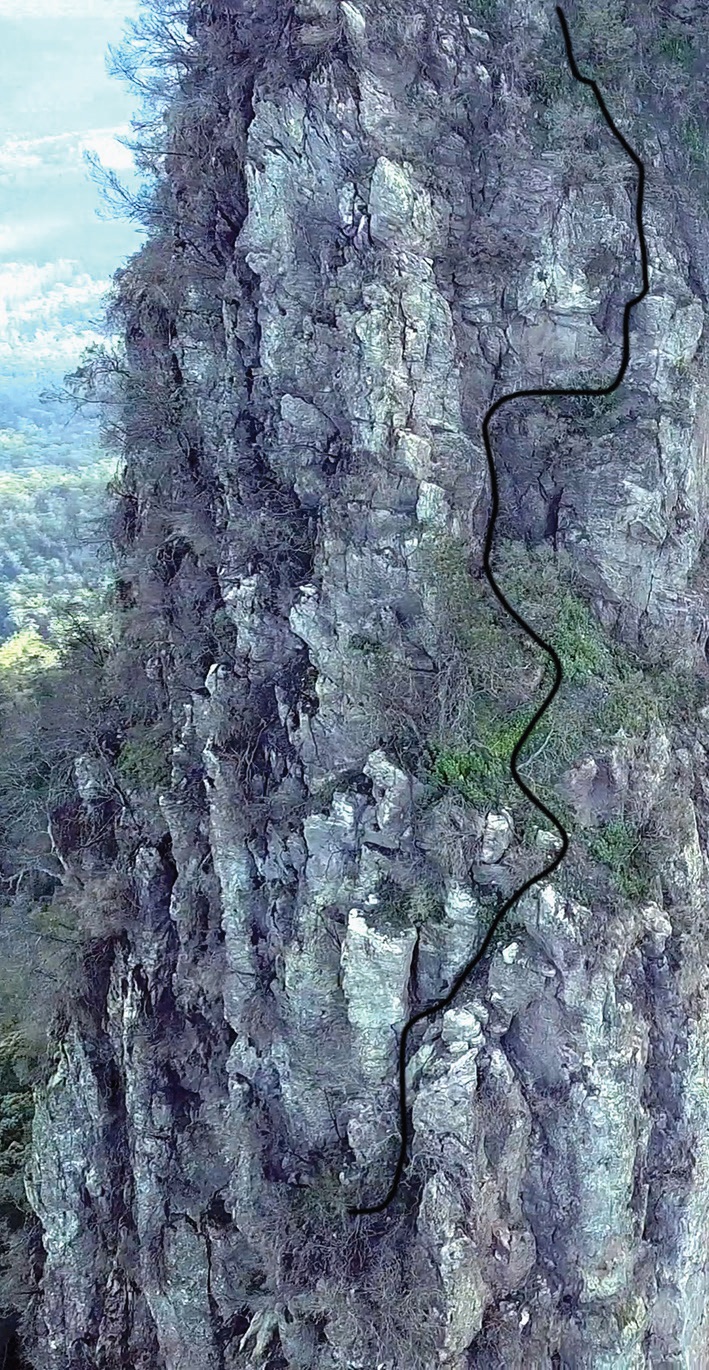 The climbing route up Mount Lindesay 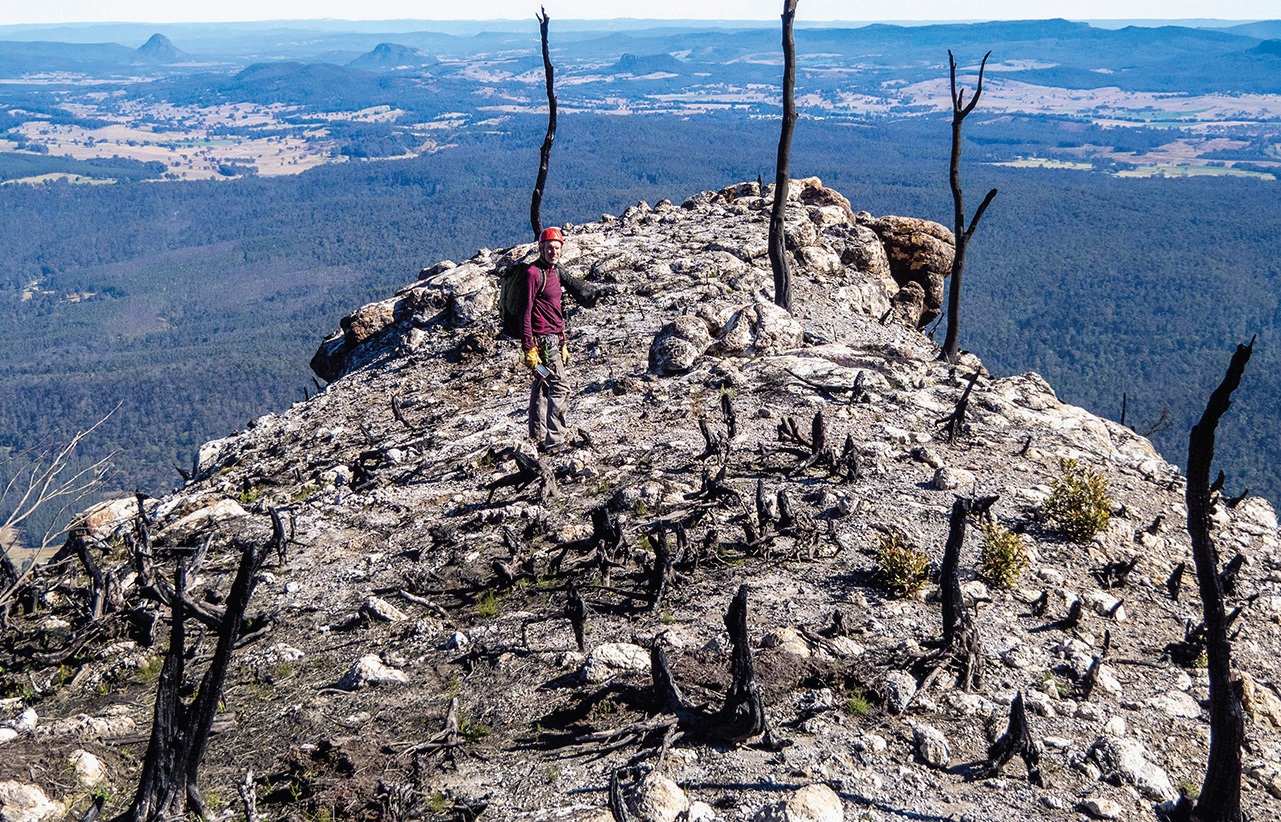 While the views have improved post-fire, the skeletal soils are at threat of erosion before seedlings hold it together 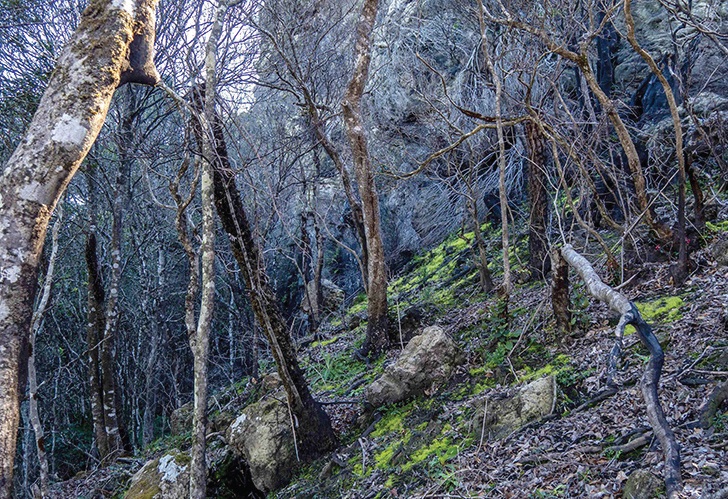 Burnt and scorched area on the summit

With the appropriate climbing safety gear, we returned on 5 July and worked our way slowly up the first cliff through a tangle of fallen trees and branches on unstable steep slopes of loose dirt, ash and broken rock. It took us far longer than we expected and we reached the upper cliffs late in the afternoon. With the shadow of Mount Lindesay creeping towards Glennies Chair to the east, we were forced to retreat again, abseiling down the last sections of the climb in the dark, using our head torches. We returned on 16 July with more time to spare.

The rainforest on the southern slopes of the mountain escaped major fire damage although in places, the fire encroached about 200 metres into the forest above the rabbit fence. At the base of the cliffs on the southern side, fire – probably started by embers or burning debris falling from above – has burned 5 to 10 metres into the rainforest undergrowth surrounding the mountain but the mature trees there appear largely unaffected.

The first section of the ‘Tourist Route’ gully on the southern side of the mountain, once a lush green hanging garden of coral ferns and numerous other montane species, is now almost devoid of vegetation — a near vertical, loose couloir of pale crumbling rhyolite with a few large surviving charred trees (Casuarina and Banksia) and some welcome tree roots (handholds!). With the ‘Banksia Bridge’ now gone, the climb involves a short, exposed section up bare rock and steep, loose dirt slopes through the burnt remnants of a small Banksia thicket. There are signs of regeneration from the blackened stumps on this shaded southern slope but there were no seedlings visible. The route then traverses to the eastern side of the mountain through broken rock towers, less affected by the fire, although large Banksia and Casuarina trees there have burned.

Once a green, shaded tunnel through myriad vegetation types, the ascent route up the first tier of cliffs is now bare and exposed. The thick undergrowth has gone and burnt remnants are all that remain of the small stands of mature trees. There are now sweeping panoramic views, albeit through a grid of what remains of blackened Casuarina, Banksia and Melaleuca branches. But regeneration is evident, especially seedlings, in the thick ash layers on the drier eastern and western ends of the verandas.

On the first veranda, the fire spared a 20 metre wide band of rainforest on the eastern razorback ridge. There were several other small untouched sections of rainforest on the southern slopes of the veranda but most of it has been severely burned. The fire swept through an extensive area of Casuarinas and grasses at the western end of the first veranda before continuing up the cliffs to the upper veranda and into the dry rainforest slopes, south and west of the summit. Curiously, a three metre diameter green space remained untouched on the very top of the mountain. On the western end of the upper tier, a once dense Casuarina forest there has been all but vaporised with only a few blackened stumps remaining, affording an almost 360 degree panoramic view of the peaks of northern New South Wales and southern Queensland. But seedlings and regenerating stumps are numerous here, particularly in sheltered areas. 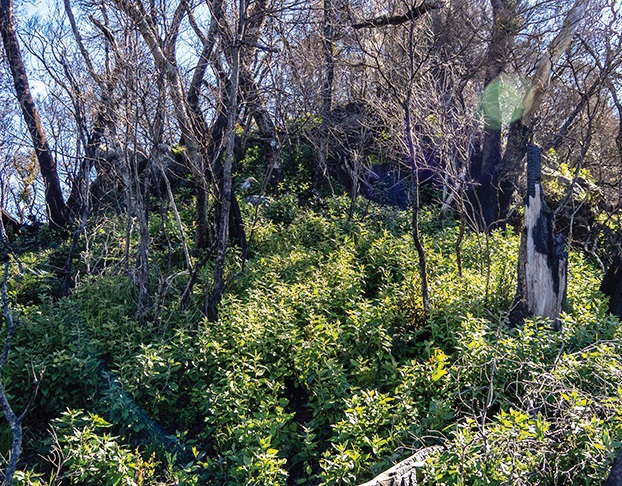 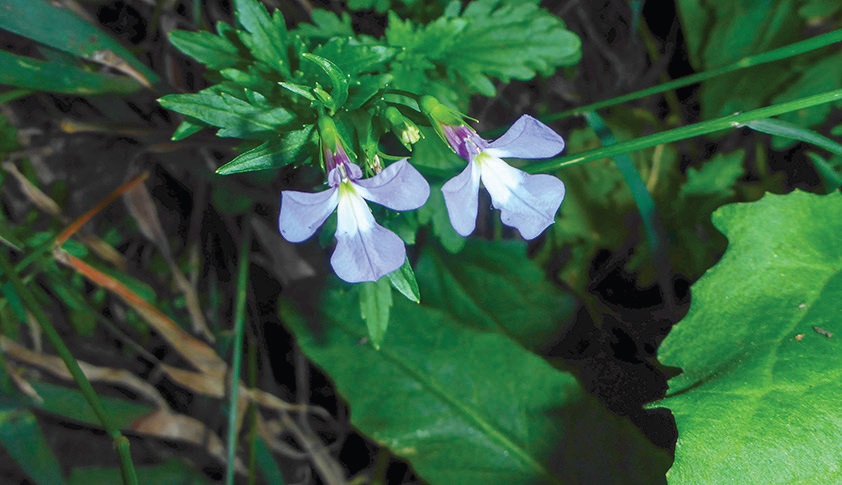 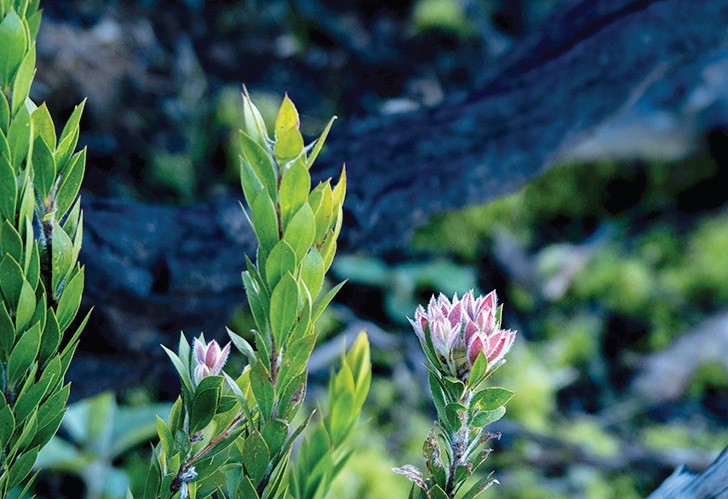 New shoots on a Melaleuca

The two tiers of cliffs that define Mount Lindesay – around 120 metres (lower) and 60 metres high respectively – appear to have offered little protection from the fire for the forest communities above. But while it burned the vast majority of the greenery above the cliffs, a significant area of pristine rainforest at the very top of the mountain, east of the summit, escaped and on the day we were there – 16 July – we could hear an Albert’s Lyrebird calling from somewhere within it.

The fire and subsequent heavy rainfall in early 2020 have left the climbing route in a dangerous condition, with falling rock almost a certainty because of slope instability. But on the mountain itself, the degree of regeneration we witnessed is encouraging. 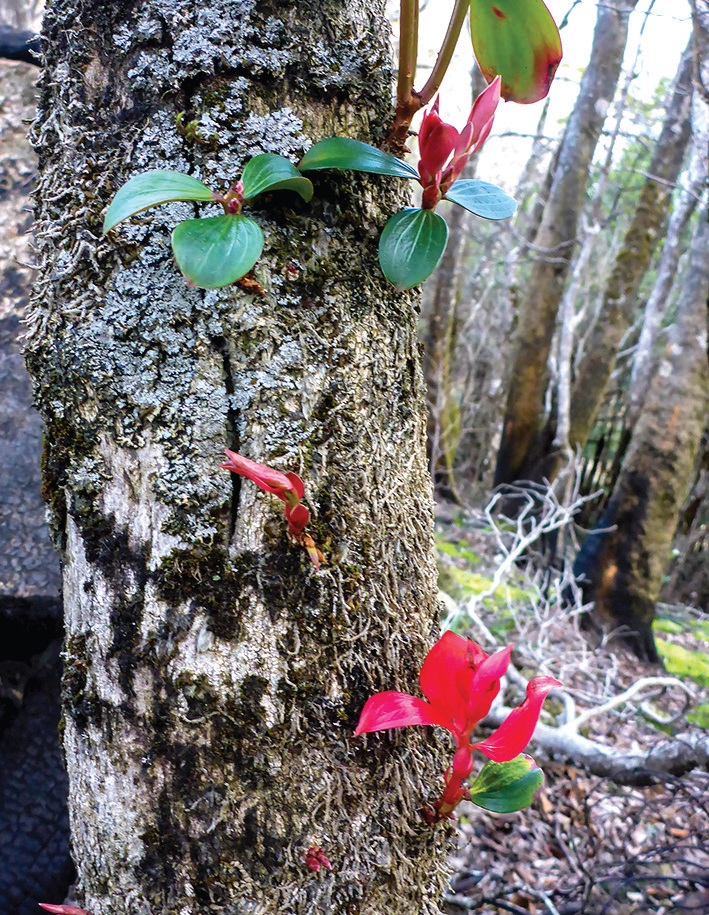 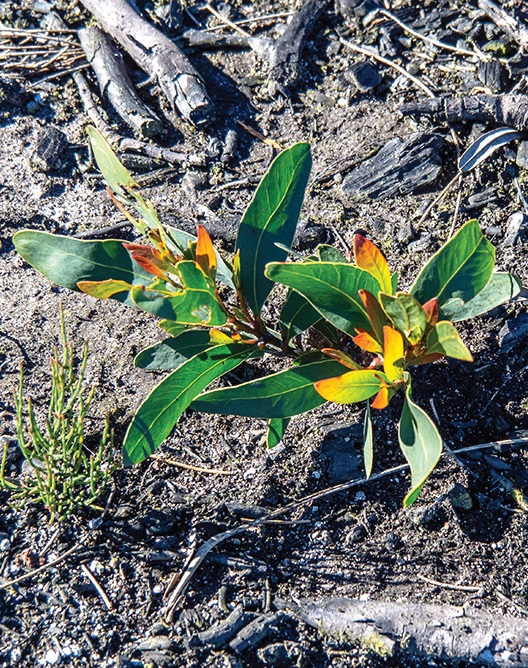